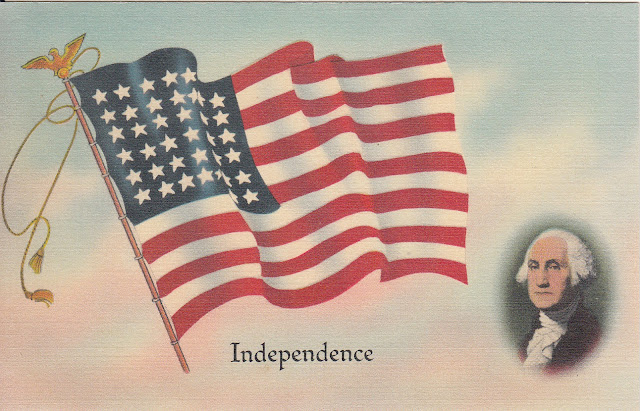 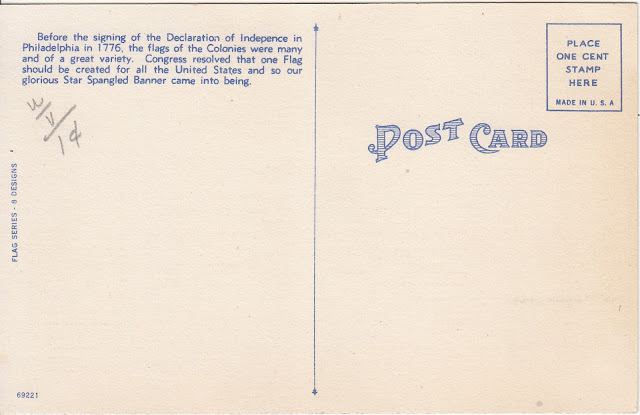 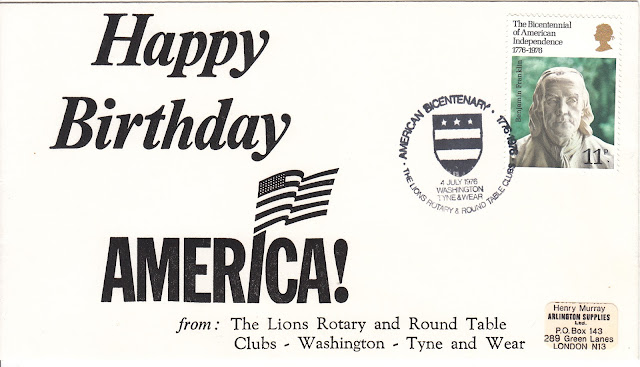 The history of Tyne and Wear is too complicated to go into here but here's a picture. 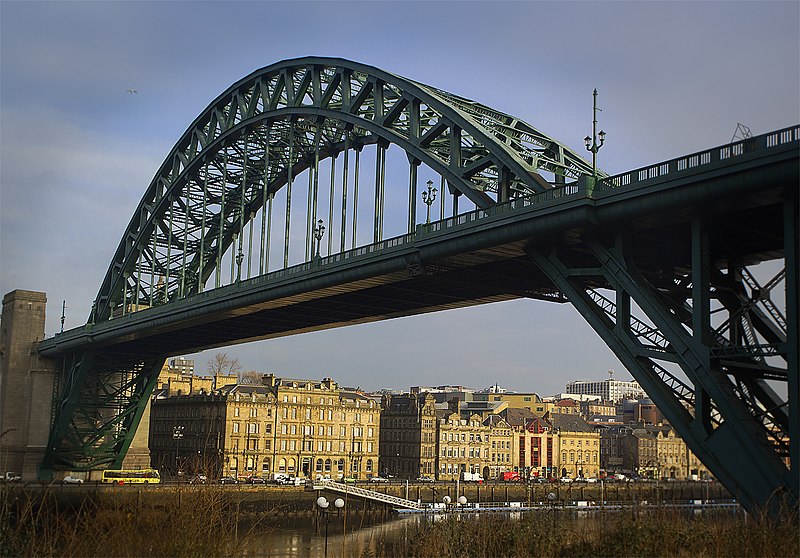 Posted by Hackenbush at 11:28 AM No comments:

These are strange times we're living in.  Thought this would be appropriate. 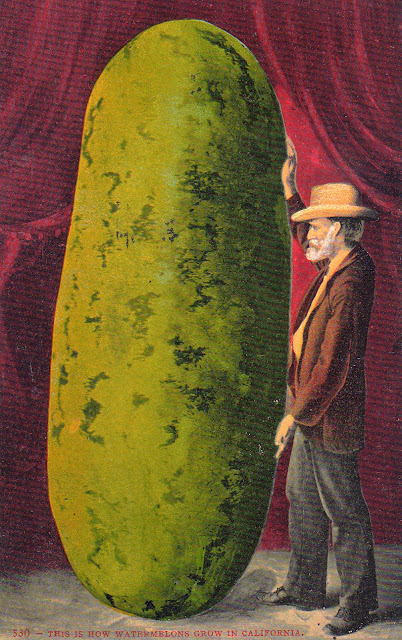 I have a small collection of these cards, known as "Tall-Tales".  They feature mostly exaggerated fruits, vegetables, and animals.  This one dates from around 1910.  There is a second version with the same card number 530 but with a younger man with a mustache.

Today is the first day of Hanukkah.  I don't own a menorah or more properly, a hanukkyah.  I do have this nice first day cover from 1996.  Happy Chanukkah to all my Jewish friends and to anyone else who would like to join in. 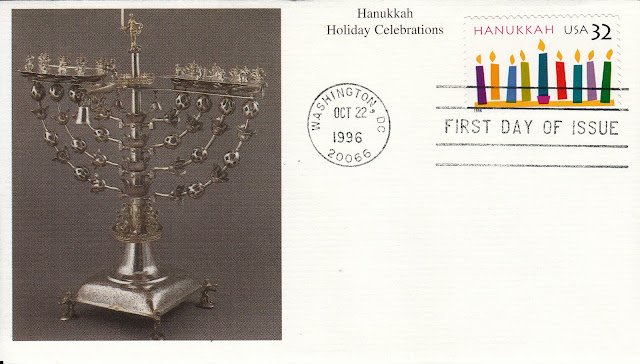 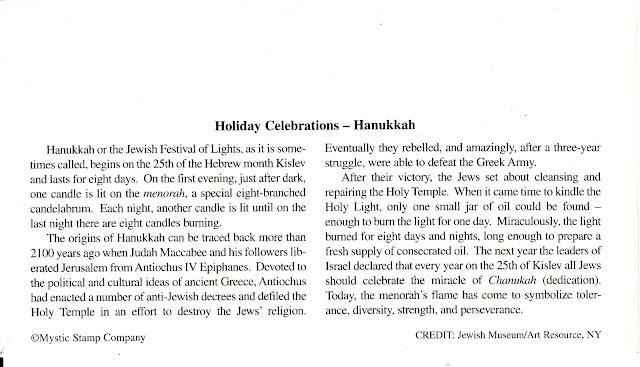 Happy Thanksgiving everyone!  I'm going to watch my Bears play the Lions today then have a small family gathering.  Hope you all find something to be thankful for today.

Hard to believe this beautiful card is 111 years old. 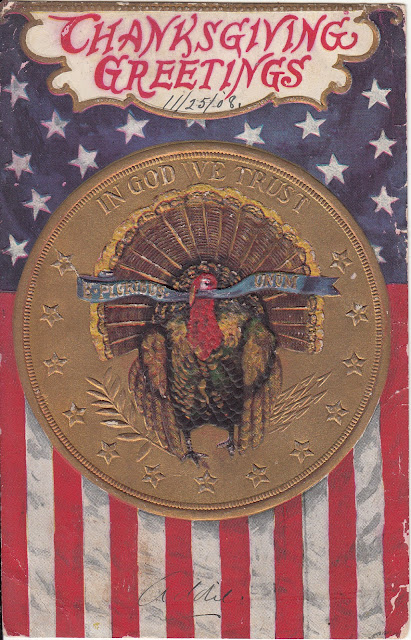 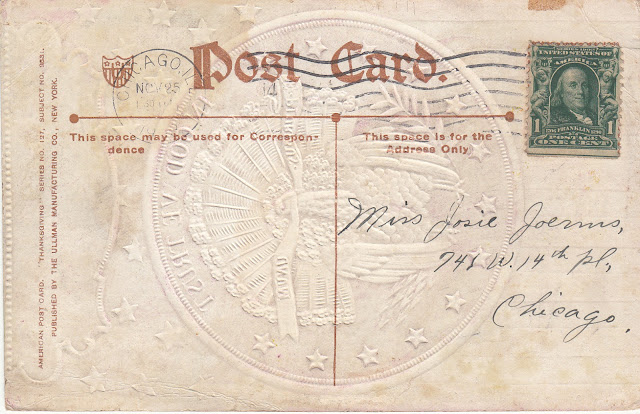 According to Wikipedia:
"On Thanksgiving Day afternoon (November 28), a crowd of 25,000 turned out in Philadelphia to watch unbeaten Pennsylvania host unbeaten Cornell. Quarterback Albert Miller guided Pennsylvania to a 17-4 win. Though Penn "found the boys from the shores of Lake Cayuga a harder proposition than she looked for", wrote a New York Times reporter, they "closed the season without once drinking from the bitter cup of defeat, and to-night her followers are claiming at least equal rank with Harvard.". 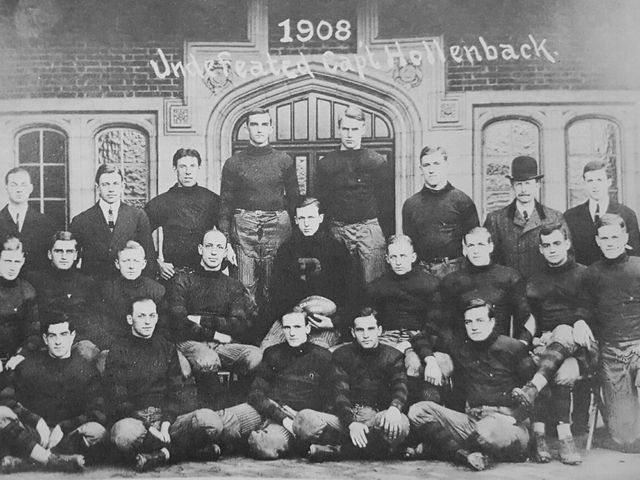 The University of Chicago Maroons in 1908 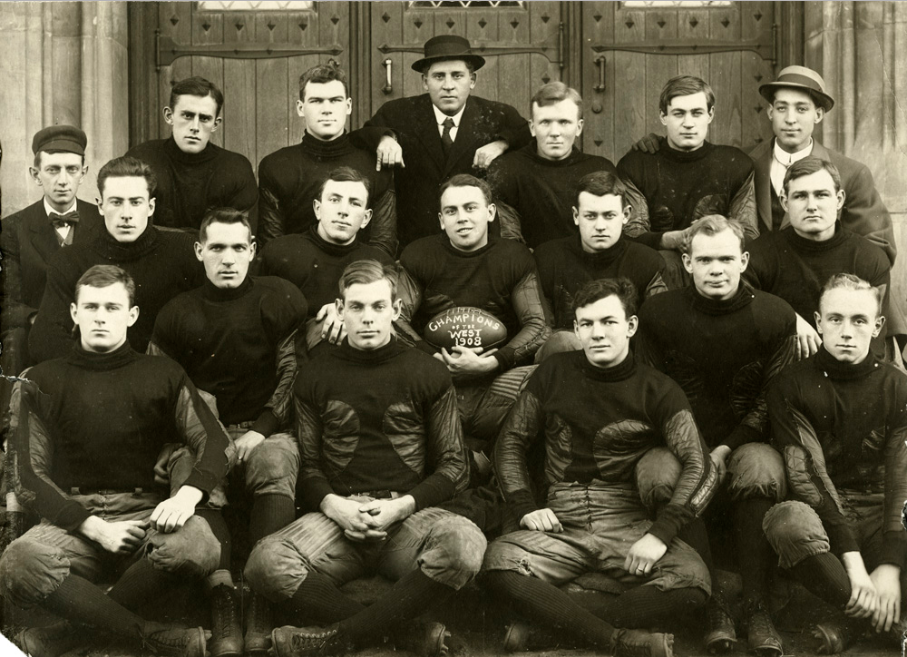 Of course, on the North Side, fans were still basking in the glow of the Cubs recent World Series repeat win over Ty Cobb and the Tigers from Detroit. 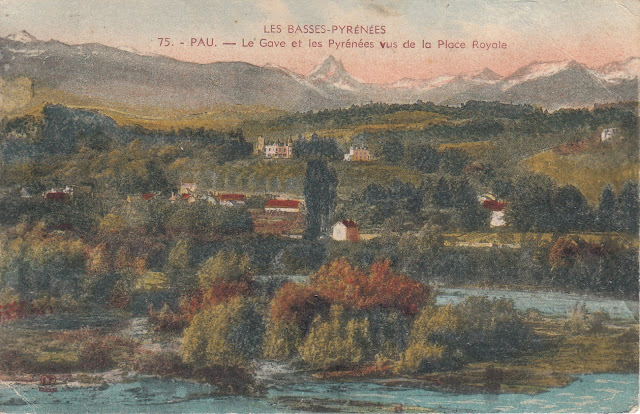 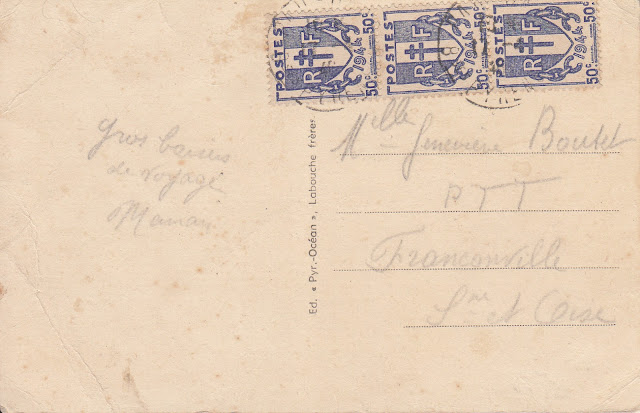 How does one begin a blog?  Well, I guess this one has already begun.  My first post was of a Ron Santo postcard.  Not only does it express my love of sports and the Cubs but also my love of Chicago.  You will see a lot of my city here.  There's nothing particularly significant about this postal but I have to start somewhere.

I'm still really a neophyte when it comes to postcard collecting.  I know some of the lingo and the history but I'm still learning.  Feel free to correct me if I get something wrong or share your knowledge either about the hobby or the specifics of a card. 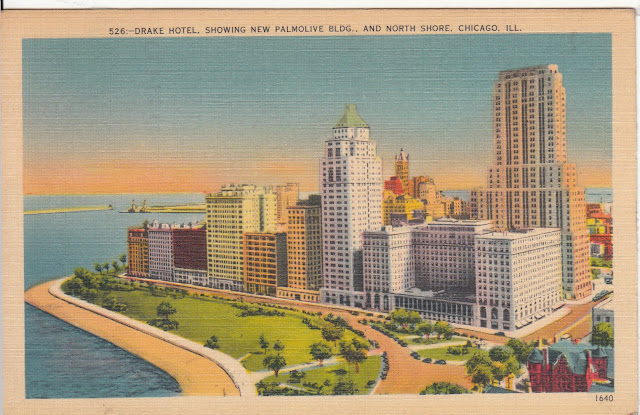 I'm a North Sider so this is a familiar sight, that is, the more recent view of this area.  What you're looking at seems to be a pre-1930 view.  The Palmolive Building is shown without it's beacon which was added in 1930.

The sign was illuminated in 1940, a year before this postcard was mailed. 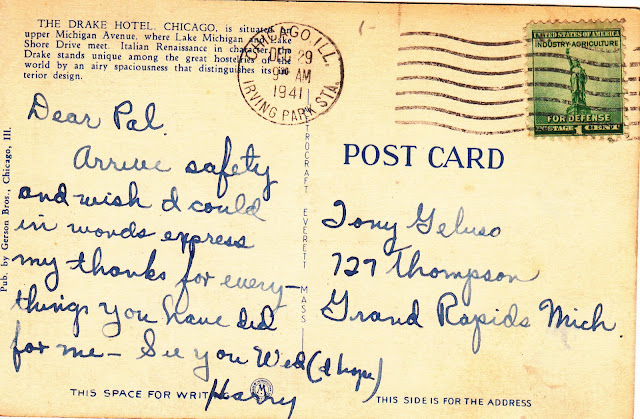 One of the things that attracts me to deltiology is the time capsule aspect.  This card has captured a specific moment in time and place.  Who were Harry and Tony?  What was going on December 29, 1941?  December 1941.  Pearl Harbor.  America was just three weeks into WWII.  I did a small bit of research on Tony Geluso.  If I have the right man, he was about 28 years old and had, at least recently, been living with his parents and younger brother.

Anthony appears to have enlisted in the Navy, survived the war and lived to age 69.  He married his wife Esther just after the war in 1946. 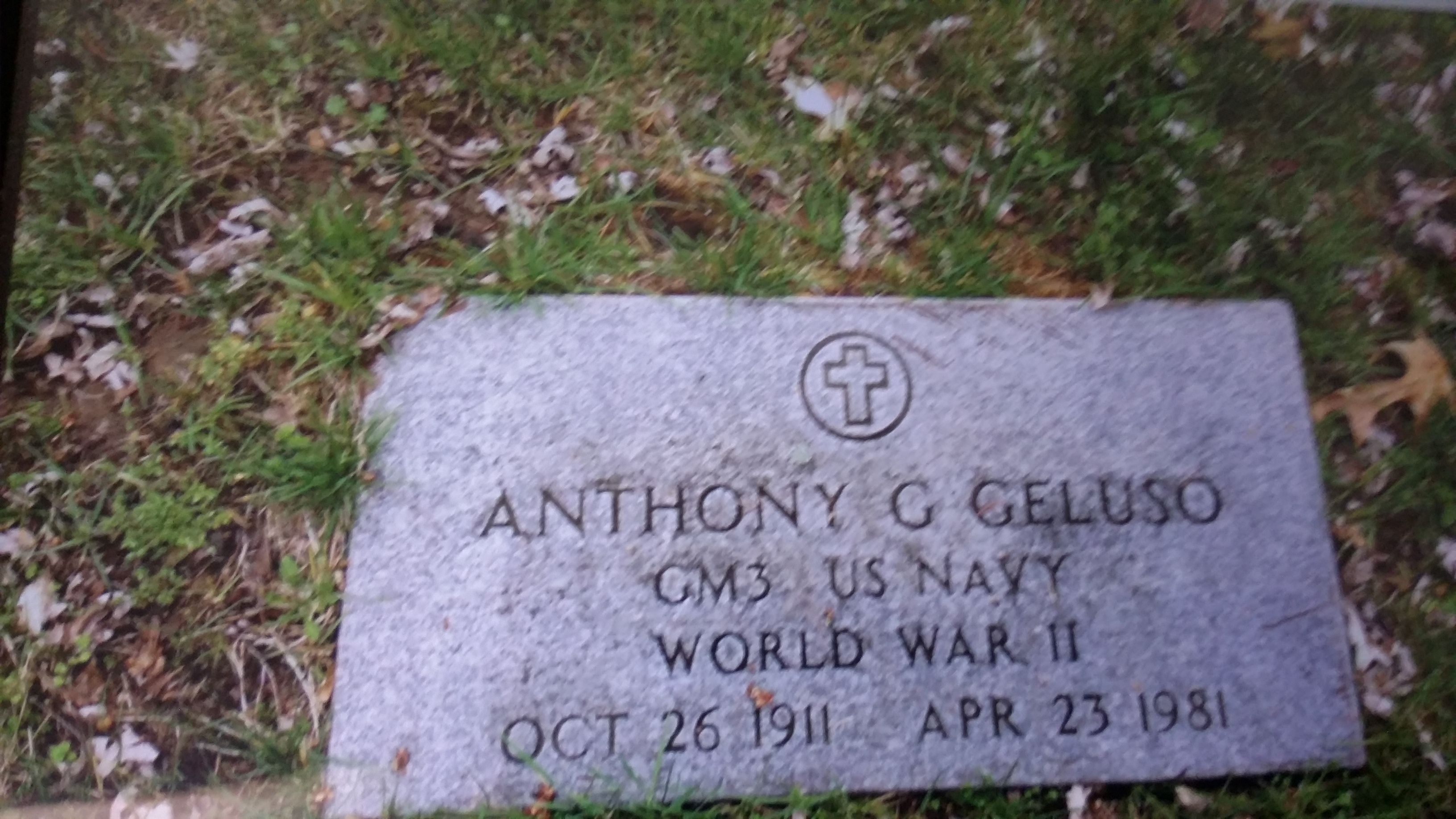 The address the Geluso's were living at seems now to be occupied by a newer building housing the Kent County Human Services.

Founding member of the Moody Blues, Ray Thomas was born on December 29, 1941.

That's about all I have.  Please don't expect this of every postcard.  Thanks for stopping by.

Under Construction Check Back Soon!

Posted by Hackenbush at 8:00 PM No comments: